This is going to be a short post... I've just got a little nice toy, and I've moved 3 of my SIMH machines to it. 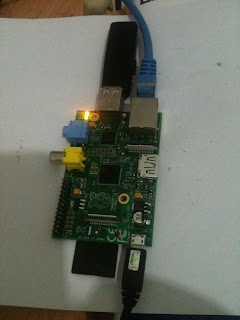 Yes, it is a Raspberry PI. And right now it is hosting three simulated machines: a VAX 780 running VMS 4.7 (and working as area router for my HecNet link), a microVAX 3900 running openVMS 7.3 and a PDP-11 running RSX11-MPlus 4.6. Of course, the simulated machines are idle most of the time, otherwise I guess they would overwhelm the poor raspberry...

To make it run, I have cloned the SIMH git repository from http://github.com/simh/simh, and before compiling it I've installed the packages for libpcap and vde2 (if you are going to do this, don't forget you have to install the -dev packages). SIMH compiled without any complaint, and once I got the simulated machines copied to the USB pendrive I've plugged to the thingy, they booted without a hassle.

After that, I just edited /etc/networking/interfaces so the vde magic gets configured at boot time:


And that is basically all (I'm using a static IP address bound to br0... the default configuration for the debian-based distribution I'm using is to use DHCP).